The old track was used for go-kart rentals for a while beginning in the 1980s. The yellow lines on the track indicate the kart course. The tires were also added for karting. Turns 1-2 were highly banked. They were taking up a lot of room in the parking area so some time after 1970, they were ripped up.

Standing where turn 1-2 would have been.

Near the exit of turn turn, looking down the back straight.

Mid-way down the back straight, looking into turn 3-4.

The old guard rail is still there.

Coming out of turn 4, looking down the front straight. The current dirt track grandstands are in the distance.

On the front straight, looking back toward turn 3-4. 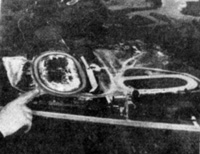 This aerial photo appeared in Wheelspin News early in 1981. It shows the dirt track on the left and the paved track on the right. The hand is that of Lou Rinaldi who had just bought the track in late 1980. The Rinaldi family still owns Brighton today.