This is how Bismark Speedway looked in September of 2003. The track was built by Albert Vanderliek, who still owned the property when I visited it and I was fortunate enough to meet him.

A low berm was built along the outside of the front straight that supported grandstand seating for 1,500. The washroom building was built of concrete block with flush toilets. The washrooms must have been top quality in their day and probably better than many tracks in use today. The officials' tower was built above the concession stand.

After the track closed, the family flooded the infield and was the home to many ducks in 2003. This area was quite popular with local bird-watchers. The track surface was gone by that time but you can see the banking and where the track was. The grandstands were still there, although the wood was rotting and the scrub is growing through. The washroom building was still standing, along with the spectator fence, the starter's stand and the officials' tower/concession stand. The whole site has been cleaned up since the death of Mr. Vanderliek and the subsquent sale of the property.

Standing in turn 1, looking back at the front straight. You can see the spectator fence and the scorers' / announcer's tower.

Some of the grandstands were still in place. 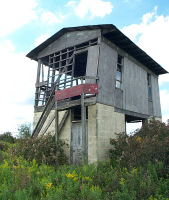 The starter's stand is at the left. This is the front straight, looking back toward turn 4.

Standing on the front straight near the start / finish line, looking toward turn 1.